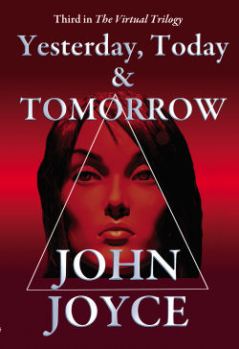 Third and Final Novel in The Virtual Trilogy

From a bomb blast in an idyllic valley in Ireland . . .
to a pitch battle in the brooding deserts of Peru.

From a massacre in a quiet Japanese fishing village . . .
to mayhem and death in a corporate boardroom in Tokyo.

From the limitless horizons of cyberspace . . .
to the depths of the human heart . . .

and the breathtaking conclusion of John Joyce’s

Theo Gilkrensky – a billionaire genius obsessed with warping the very fabric of time and space to save his beautiful rebellious wife from murder.

Yukiko Funakoshi – deceptively deadly female assassin obsessed with revenge against Gilkrensky for the death of her parents.

Minerva – a computer system so advanced that it has a life of its own – that of Maria, Theo’s beloved wife.

This is the second adventure in the “Virtual Trilogy” which finds Gilkrensky once again following his quest to regain his murdered wife Maria by bending the very fabric of space and time, all the time pursued by the beautiful Yukiko Funakoshi – a master of the martial arts, who holds Theo personally responsible for the death of her parents.

On a mission to the notorious Bermuda Triangle, to investigate continued claims against his Daedalus robot pilot system by the Miami airport authorities, Gilkrensky finds his plane under attack from an experimental stealth missile controlled by Jerry Gibb – a perverted computer games king who Theo is about to put out of business for software piracy.

During the high-speed duel over the Atlantic, Gibb becomes aware of “Maria” –  the lifelike computer programme Gilkrensky has created to ease his pain at his wife’s death and immediately lusts after her as a new playmate for his perverted virtual fantasies.

Meanwhile, Gilkrensky finds himself drawn into the mind-boggling mystery of the Bermuda Triangle, diving to the depths of the ocean to investigate the wreckage of ancient aircraft and coming to the conclusion that forces exist in the Bermuda area that, like those around the Great Pyramid of Cheops, might be harnessed to achieve his goal – the warping of time to re-unite him with Maria before her death.

Welcome to the new web site of http://www.spindriftpress.com.

We’ll be working to completely update the site over the next few days with details of all our existing publications and news of recent and upcoming events involving our favourite buccaneer – ‘Black John the Bogus Pirate’ – and his crew.

This is your very first post. Click the Edit link to modify or delete it, or start a new post. If you like, use this post to tell readers why you started this blog and what you plan to do with it.

This is a text widget. The Text Widget allows you to add text or HTML to your sidebar. You can use a text widget to display text, links, images, HTML, or a combination of these. Edit them in the Widget section of the Customizer.

This is a text widget. The Text Widget allows you to add text or HTML to your sidebar. You can use a text widget to display text, links, images, HTML, or a combination of these. Edit them in the Widget section of the Customizer.